Instead of calling, you can book an appointment with the dentist here
Start booking - choose the necessary dental treatment service, dentist and suitable visit time.
BOOK TIME
If you need help, please contact our reception

People are generally less familiar with gum diseases, but since it is the second group of very common diseases besides caries, we will devote attention to this problem here.

Some of the possible causes why gums hurt

The cause and prerequisite for the development of gingivitis is the formation and accumulation of dental plaque around the teeth. Plaque build-up can be related to oral hygiene as well as many other factors. These can be mineral deficiencies in the diet, stress, mucosal injuries, orthodontic appliances, various blood and infectious diseases, and many other factors. Gingivitis manifests itself in the first phase with bleeding while cleaning the teeth. As the symptoms worsen, the colour and appearance of the gums may change, accompanied by redness and swelling. Halitosis, or bad breath, is also a common symptom, accompanied by an unpleasant taste in the mouth. Less commonly, gingivitis can cause pain, enlargement of gums and ulcers. To diagnose the condition, the doctor will analyse the patient’s complaints and carry out an examination of the oral cavity. Treatment of gingivitis involves removing plaque and tartar during a doctor’s appointment and, together with the doctor, establishing proper oral hygiene and adhering to it. Also, the factors that cause dental plaque must be discussed with the doctor and ways to eliminate undesirable factors should be found.

Periodontitis
This is a chronic inflammation of the tissue around the teeth, caused by mineralised plaque, the occurrence of which is facilitated by a number of factors: oral hygiene, oral mucosal abnormalities, poorly finished dentures. However, dietary habits, genetic factors, occlusion anomalies, age, systemic diseases and many other factors can also contribute to occurrence of dental plaque. In the early stage, the inflammation of the gums may not be apparent. Very typically, inflammation is accompanied by redness and bleeding gums. There may also be swelling and general discomfort in the gums. Periodontitis is accompanied by receding gums, which, when the root of the tooth is left unprotected, can lead to increased sensitivity of the tooth to hot and cold. As the disease progresses, the tooth begins to move. It is important to see a doctor to catch the disease early and to control the inflammatory process. As periodontitis is an irreversible process, it is possible to halt the progression of the disease, but there are no treatments available today to fully restore the gum tissues. Regular check-ups with a doctor can help to diagnose the disease in time. Good oral hygiene must be carefully practised. 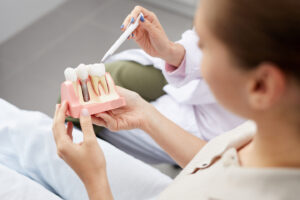 You can get further explanations about why your gums hurt during a doctor’s appointment at our clinic.